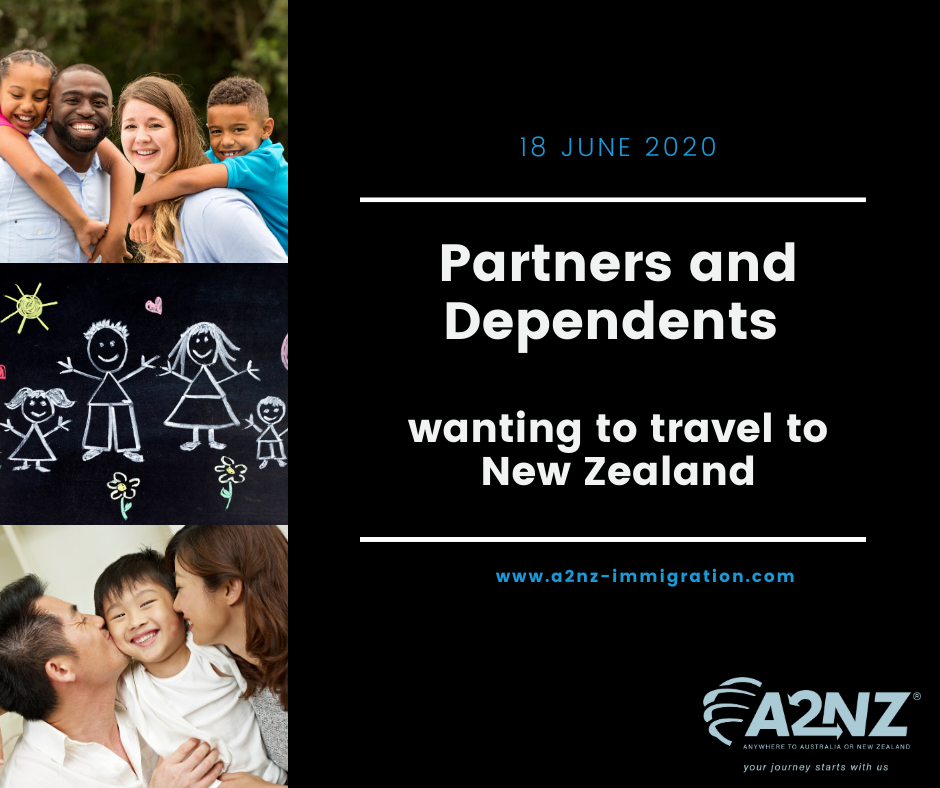 The Minister of Immigration has now certified immigration instructions to give effect to the changes announced last week and the following new criteria for exceptions to the border closure come into effect today:

A new maritime exception is also being worked through which will allow entry to those arriving at the maritime border, where there is a compelling need for the vessel to travel to New Zealand. This is expected to come into effect later in June.

Under the new instructions that came into effect 18 June, partners and dependents of New Zealand citizens and residents who have a relationship-based visa or are ordinarily resident in New Zealand will no longer need to be travelling with their NZ family member to be granted a border exception.

This change will help reunite New Zealand based families who have been separated by the current border restrictions.

Partners or dependents of a New Zealand citizen or resident who have a relationship-based visa will be able to travel on that visa and will not need to request a border exception.

Partners or dependents of a New Zealand citizen or resident who are ordinarily resident in New Zealand but do not have a relationship-based visa should request a border exception. If their request is approved, they will then be invited to apply for a visitor visa, another visa that suits their circumstances, or to vary their existing visa to allow them to travel.

Partners of New Zealand citizens or residents who are not travelling together, are not on a relationship-based visa or are not ordinarily resident in New Zealand will still be subject to the border restrictions, unless they meet another border exception criteria.

Anyone who is unsure about whether they need to request an exception is able to make a request through the form on our website and INZ will either process the request or advise them that they are able to travel on their existing relationship-based visa.

The government recognises that the border restrictions have resulted in hardship for many migrants, including those who have been separated from their loved ones and those who have not been able to return to their jobs and homes.

These changes will enable more people to be eligible for an exception to the strict border restrictions. However, there will continue to be some migrants who will not meet the exception criteria to travel to New Zealand.

While we understand how difficult this must be, we must balance the individual circumstances with both the need to protect the health of New Zealanders and our current managed isolation capacity.

2. Criteria for ‘other critical workers’

The Government has agreed to specific criteria for determining whether someone is considered an ‘other critical worker’ and is therefore eligible for an exception.

A worker coming to New Zealand for a short-term (less than six months) may be considered a critical worker if:

A worker coming to New Zealand for the long-term (more than six months) may be considered a critical worker if they meet one of the short-term criteria above and:

A list of approved infrastructure projects is available here.

In addition to these lists, guidance from relevant portfolio agencies will continue to be sought to assist in determining the merits of individual workers and (when appropriate) whether the worker’s skills and experience are genuinely unobtainable in New Zealand.

Holding an Essential Skills work visa is not sufficient to qualify as a critical worker.

We are aware that a number of employers have offered to cover the quarantine costs for migrant workers they successfully hire. The employer or supporting agency is responsible for paying for quarantine or managed isolation when the worker arrives in New Zealand.

The process for ‘other critical worker’ applications

See link on how employers can apply.

We are committed to deciding requests for ‘other critical workers’ as quickly as possible, but we do expect these requests to take longer than requests for other exceptions.

Once a request from an employer has been approved, the designated ‘other critical workers’ will be invited to apply for a visa which will allow them to travel to New Zealand. Standard immigration requirements such as health and character still apply.

INZ is committed to ensuring the criteria are applied appropriately and consistently.

The border is New Zealand’s biggest vulnerability in our fight against COVID-19, which is why the starting position is that New Zealand’s border remains closed to all but New Zealand citizens and residents.

The bar for being granted an exception to the border restrictions is set high to help stop the spread of COVID-19 and protect the health of people already in New Zealand.

INZ has no ability to apply discretion when considering requests against the border criteria.